An uncommon look at frost wedging in the lab under ‘autumn’, ‘winter’, and ‘spring’ conditions 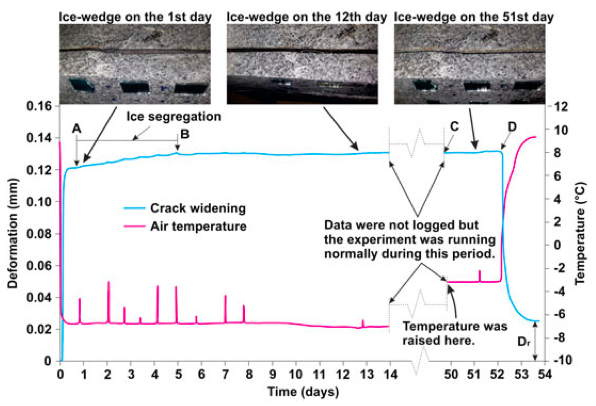 Figure 1 – Time series of crack widening and air temperature under long-term ‘winter’ conditions. Spikes occurred when visiting the chamber; each visit lasted  <2 min. The photographs show plan views of the top of the ice vein on days 1, 12 and 51. A vertical face of the block is visible in the lower third of each photograph.  (after Jia et al., 2017)

Frost wedging describes the process by which pressure from the expansion of freezing water in pre-exising fractures generates sufficient tensile stress to propagate the crack further into intact rock. Although this seems like a reasonably common sense interpretation (given the transition from water to ice involves a 9% expansion that’s often associated with the bursting of steel water pipes and forgotten bottles undergoing a quick chill in the freezer), it’s long been recognised that this process may not work in open cracks in natural bedrock environments. Just as freezing ice cubes doesn’t break the ice tray, in a recent experiment undertaken by Jia et al., 2017, we see that the extrusion of unfrozen water, and then frozen ice, allows for ice expansion without a significant increase in internal pressure in a granite block subjected to laboratory protocols simulating ‘normal’ autumn and spring freezing conditions. In fact, the faster ice froze, the more efficient the extrusion of water, and the lower the final pressures were in our experiments.

Intrigued by these somehow obvious, though counter-intuitive findings, we did our best to give ice a shot at opening an artificial crack that we had cut close to the end of a granite block. We relatively slowly froze liquid water in the crack, while cooling the granite block down to -7° (a procedure shown to preserve the maximum expansion-induced stress). We then held temperature more-or-less constant for just over 50 days, a proxy for autumn to winter conditions. Many have suggested ‘ice segregation’ (the gradual migration of unfrozen water to a growing ice lens) is a likely driver of frost wedging. While we did observe some opening of our artificial crack consistent with that predicted for ice segregation for five days after initial freezing, the effect was minimal, and the process stopped as our block presumably dried out. What we did observe over the 53 days, was a relatively stable aperture, with very slight opening as ice retreated into the crack due to sublimation. When we finally turned off the freezer, the crack almost completely closed again, though a displacement of 0.025 mm remained (see Figure 1, above) – we had caused a permanent deformation through the course of the experiment. Success!

Well, sort-of. While we had damaged the rock with the ice wedge, a simple numerical model, indicated we didn’t generate enough opening to really break the rock a the crack tip, at least quickly as in typical lab tests. And if the ice was disappearing, how did the crack slowly jack open? Weighing up the possibilities, we decided the most likely reason was spontaneous melting of ice in the crack, which allowed water to migrate deeper before re-freezing (see Figure 2, below) . This was almost certainly what we observed in shorter (~1 day) experiments also presented in the study, as the ice-filled crack consistently opened during the warming phases of our ‘autumn’ protocol. Still, stress levels associated with the opening appear to have been too low to cause instantaneous damage. Instead, we consider a gradual corrosion at the crack tip, aided by low-to-moderate tensile stresses, degraded the rock and allowed the fracture to propagate at lower than expected levels. The process of stress corrosion cracking (or static fatigue) is well known in various engineering fields, though is only now gaining recognition in geosciences. 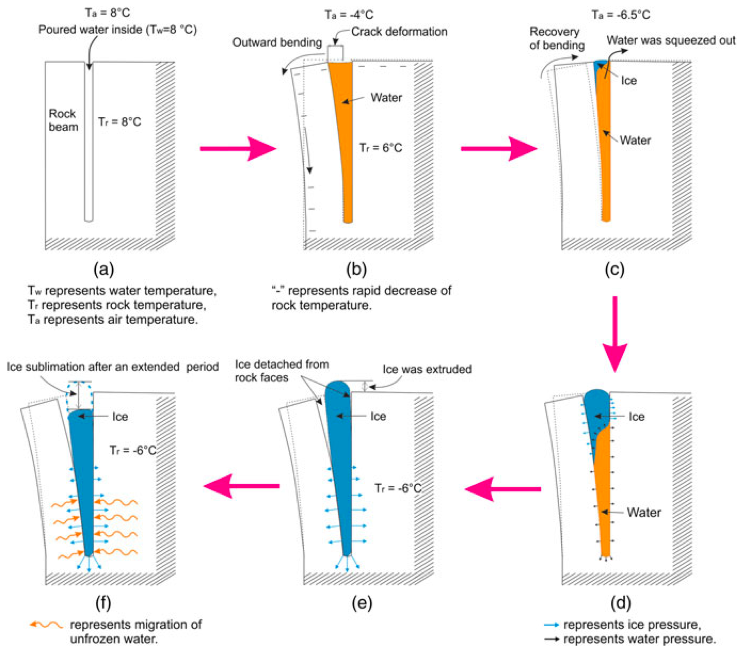 Figure 2 – Not to scale. (a) notation and schematic of ice flow; (b) simplified calculation model of ice pressure along crack faces; and (c) stress intensity factor at the tip of the crack.(after Jia et al., 2017)

It’s commonly observed that rockfall activity peaks in spring (e.g. Saas and Oberlechner, 2012), and while this is likely associated with the release of blocks from melting of snow and ice, gradual fracture propagation due to refreezing of meltwater at crack tips in combination with stress corrosion processes may provide the rate-limiting prerequisite that frees the blocks in the first place.

In parallel with this experiment, Anne Voigtländer and I have been undertaking long-term stress corrosion experiments on large marble and quartz beams. Results indicate it’s easy to break rocks at moderate stress levels when water is present, and when we add water to stressed dry samples, failure occurs within 24 hrs. Visit the project page, and ‘watch this space’ to read published results of these experiments soon.

A new paper on the evaluation of landslide hydrology