In late August 2017 moderately-sized rockfall occurred on a south-facing rock wall above the popular Gelmersee hiking trail (immediately north of Grimsel Pass), leaving six people injured. Although the occurrence of such rockfalls in alpine regions is unsurprising, the location, geological setting, and timing of this event mirrors conditions associated with a number of recent high-profile mid-summer rockfall and rock fracturing events observed around the globe. Traditionally,  small to moderate-scale rock slope failures (up to 100,000 m3) are associated with strong meteorological events (such as heavy rainfall, strong snow or permafrost melt, and extreme diunrnal temperature cycles). However, an increasing body of evidence is beginning to point toward unusually high rock surface temperatures as both a driver of fracture propagation (e.g. Twian Harte (USA), and Langoren Island (FIN)), and trigger for rock slope failures (e.g. Half dome (USA) in 2015, and 2017, Glen Canyon (USA) in 2015, and Espirito Santo (BRA) in 2016). The Gelmersee event occurred  just after midday on the 20th of August, in the midst of a very hot summer, and two days after particularly warm temperatures (up to 19 deg C) were recorded at the local Gelmersee weather station. Although this does not stand out as an extreme value in terms of global measurements, it’s well above average for the station, and (for example) maximum temperatures throughout the month of August were around 5 deg C above normal at Interlaken, some 40 km away. The actual event occurred on a warm, clear day following day and a half of rain in the region, and while there is some suggestion this precipitation may have enhanced the fracturing process through stress corrosion, or generated a wedging force by freezing in the rock face, neither explains the midday timing of the rockfall, or the fact another (smaller) event seems to have occurred around the same time some 100 m higher on the rock face. The two-to-three day delay mirrors observations in both Finland and the USA, in which exfoliation events occurred a few days after the peak temperature – presumably as a result of the accumulation of thermal stress in the rock mass. 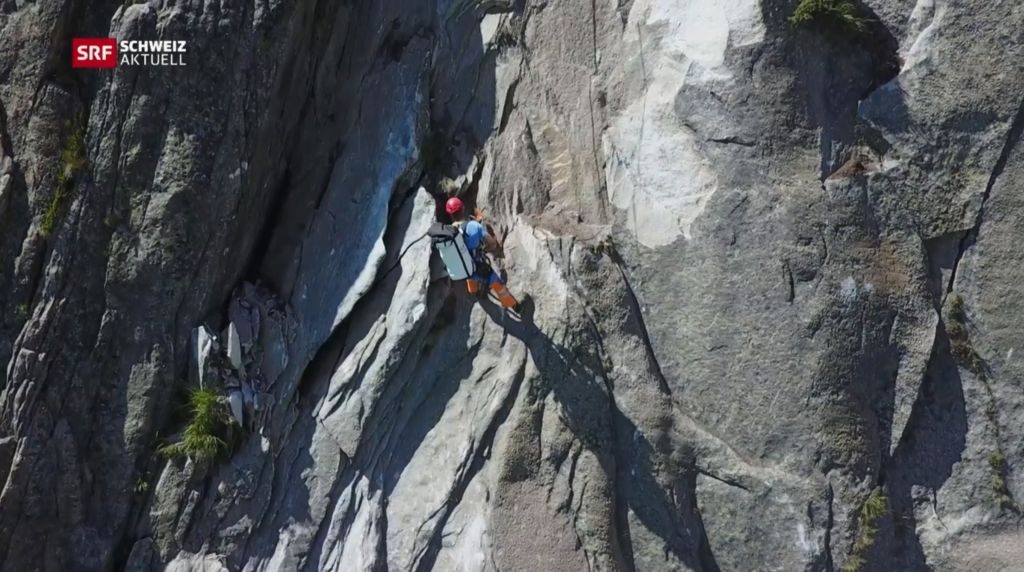 A ‘mountain cleaner‘ scaling loose rock off the site of the 2017 rockfall release. Note the characteristic planar ‘exfoliation’ fracture to the right of the cleaner. Credit: SRF Schweiz Aktuell (click the image to view the full video)

Although apparently unspectacular in the greater scheme of alpine rock slope instability, the potential correlation between high ambient temperatures, the development of bedrock fractures, and associated rockfall events may have far-reaching implications in the face of decreasing snow cover and rising summer temperatures in alpine regions worldwide. In this project we will install ‘bedrock weather stations’ to monitor thermal stresses and moisture on the rock surface at the Gelmersee. Through a combination of field mapping and a review of historical records (including engineering reports prepared for the local hydropower authority) we will characterize principal modes of rock slope failure in the region, and investigate a historical link between summer temperatures and rockfall activity. Data from a nearby weather station will then be incorporated with the bedrock weather station data in order to produce a thermomechanical model for the site during the summer of 2017 (this will be based on a previous model we have produced for the Langoren Island site – see the animation below). Our results will provide new insights into the behavior of high alpine rock slopes in response to abnormal summer temperatures, and shed light on the mechanics behind a potentially emerging mode of rock slope failure in similar settings worldwide. The candidate should be confident working in alpine settings (though roped work is not foreseen), and is expected to have experience in engineering geological discontinuity mapping and rock mass characterization, as well as a solid background in basic physics. Numerical modelling will be undertaken in parallel with a number of staff, as well as PhD and MSc students  using the COMSOL Multiphysics software in the Engineering Geology group, and as such we aim to develop a user network that provides a relatively easy introduction to the process.

Numerical model of thermal stresses initiating a pop-up on a 32 m2 granite outcrop.

Do glaciers really do all the work? Perhaps not. Check out our new paper to find out why.