Fracturing of ancient bedrock surfaces during an extremely hot summer 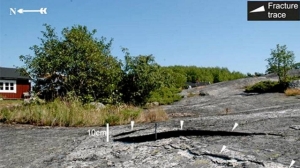 NOAA reports that August 2014 was the hottest since records began. Long periods of exceptionally high temperatures in California and Finland this summer have been associated with the formation of large ‘exfoliation’ or ‘sheeting’ fractures in bedrock surfaces that may have remained largely unchanged since the last ice age. Recent videos show sharp fractures forming along the edge of thin (<1 m) bedrock sheets several meters across, before the rock surface appears to jump and buckle in the hot summer sun. Long scratch marks (‘striations’) visible on the surface of rock in the Långören (Fin.) case are the result of boulders being dragged over the landscape during the last glacial period (>15,000 years ago), hinting at the rarity of the recent events on the otherwise undamaged surfaces. A more hummocky surface scattered with isolated boulders at Twain Harte (Calif.) indicates (somewhat ambiguously) that although rare, this process may have occurred sporadically over a similar time interval.

While geologists in both the USA and Finland work to understand conditions that contributed to these events, this type of fracture is well known from other settings (e.g. quarries, mines, and tunnels), and the mechanism of joint formation is therefore relatively clear. Better termed extensional fractures, these features form as a result of very high stresses (pressures) acting parallel to the bedrock surface, while very low gravitational stresses hold the bedrock in place. Much like a metal plate buckling on a hot element (often with a surprising “pop”), thermal expansion of horizontally confined rock surfaces causes an increase in horizontal stresses, and can lead to a buckling of bedrock once conditions become critical.

Examples of extensional fracture formation in various environments.σ1 refers to the maximum principal stress, σ3 is the minimum (typically gravitational) stress. A) ‘Sheeting’ fractures developing in relatively flat-lying topography B) ‘Exfoliation’ fractures forming on the side of a U-shaped glacial valley C) ‘Spalling’ of highly stressed bedrock in a borehole or tunnel. (Leith et al., 2014)

Unlike the metal plate, however, joints separating the bedrock surface from underlying rock are generally not continuous, and many intact ‘rock bridges’ need to be broken before the surficial plate is large enough to “pop” (see video) (the stress required for buckling decreases as plates become larger). A pre-requisite for these spectacular events is therefore the destruction of rock bridges, which in this case likely occurred as thermal expansion caused stresses at the tips of existing cracks to exceeded critical levels. The subsequent propagation of fractures sub-parallel to the ground surface will then increase the area of crack tips (thereby dissipating fracture energy) until either the fracture again becomes stable, or the sheet becomes large enough to buckle.

Kallio repeää video of fracture formation and buckling at Långören Island in Finland. Glacial striations run from the upper left to lower right of the image. From Geologian tutkimuskeskus on Vimeo.

The gently undulating bedrock landscapes of the Finnish (map) and Californian (map) events are classic examples of regions that have evolved through erosion of hard, unweathered bedrock, and although heating and thermal expansion almost certainly triggered these events, bedrock in both regions is known to already maintain very high stresses resulting from millions of years of exhumation (erosion) and tectonic strain (essentially being stretched and squashed by plate tectonics). In some cases these stresses can equal to the load of a more than 1 km high mountain (~25 – 50 MPa). These long-term stresses are often limited by the strength of the local bedrock, and thermal stresses therefore need only push loading conditions ‘over the edge’, providing enough additional stress to initiate the active fracturing process. Interestingly, the current period of fracturing indicates stable fracture systems were not fully developed at these ancient bedrock sites, suggesting either peak stress levels have increased over time, or fracture toughness has decreased (i.e. through stress corrosion or weathering). These will be key questions for scientists in the coming months.

Global temperature anomalies for August 2014. Both California and Finland are noted to be ‘Much Warmer than average’, and local weather stations in both locations record temperatures during the July – August 2014 period. (Source: NOAA)

Climatically-induced extensional fracturing events are rare in both geological, and historical records – the Finnish Geological Survey report no similar events are known in Finnish history. However, the observation that thermal stresses can cause extensional fracturing in rock is not new, and some quarries in India still use fires set on the quarry floor to generate new extensional fractures and speed up the extraction of rock. In other regions where rock is known to carry high stresses, traditional quarries commonly observe the expansion of pit walls or floors into the working area as pre-existing stresses are relieved by the removal of adjacent blocks. 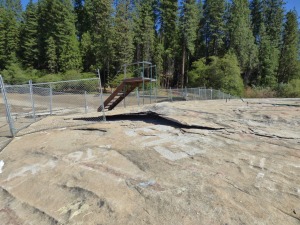 New exfoliation fractures creating a ‘pop-up’ structure beneath the diving board at Twain Harte lake, August 2014. The artificial lake was drained as a result of the formation of extensional fractures beneath the dam abutment. (image credit: G. Hayes).

Extensional fractures are common features in post-glacial landscapes, and in research published early this year, my colleagues and I find that this mode of fracture formation is likely to be an essential factor in the progression of glacial erosion. Unlike the events of this summer, however, sub-glacial environments can preserve much higher stresses, and extensional fracturing in association with glacial erosion is therefore likely to be much more energetic (similar to ‘spalling’ which frequently causes rock to explode and fracture steel supports in new tunnels). While this more energetic form of fracturing is almost impossible at the Finnish and Californian sites, these two new videos provide a fantastic example of how small stress changes can cause dynamic fracturing in natural bedrock, and provide insight into the explosive fracturing and rapid erosion that may sometimes take place beneath large glaciers. Perhaps more importantly, however, these videos demonstrate how critical it is for scientists to understand the physics of natural environments in order to predict changes resulting from natural or human-induced changes to the Earth surface.

The topics discussed in this post form the basis of a new session at the European Geosciences Union General Assembly early next year ‘Geomechanics in natural environments: quantifying environmental stresses and physical soil or rock behavior’. Myself and the other convenors welcome anyone who has an interest in environmental stresses and the mechanics of Earth surface materials to submit an abstract, or come along to participate in discussion at the session.

Randa rockfall update: One of those rare cases