Randa rockfall update: One of those rare cases 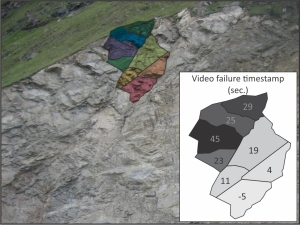 Image describing the upward-propagation of failure during the first minute of the 29/08/2014 event. The background image is a pre-failure photo taken two weeks prior (12/08/14, credit: J. Beutel).

One of the fortunate things about working in the European Alps is that many valleys are densely populated, and few large events go unnoticed. The Randa rock slope in the Matter Valley is a particularly well-studied location, and nearby scientific installations are currently used to monitor climate, permafrost, debris flows, and other alpine hazards. In the case of the 29/08/14 failure, members of the ETH Zurich had captured images of the rock slope two weeks prior to the event, and as the SLF was working in the region at the time, images immediately (approx. 30 min) after the event are also available. This is a rare case for such a large alpine rockfall, and in addition to the video I posted earlier could offer opportunities to investigate the driving mechanism and failure process with more detail than is usually possible. Such data can be very useful for scientists and engineers seeking to better understand rock slope behaviour, and may help us more accurately predict future activity of similar rock slopes from pre-failure observations.

Although there is no substitute for on-site inspection, by comparing pre- and post-failure images we can make a first-pass at delineating the approximate region of failure. And by comparing blocks outlined by large fractures to stages of failure in the video we can also make a reasonable estimation of the sequence of failure (see above). 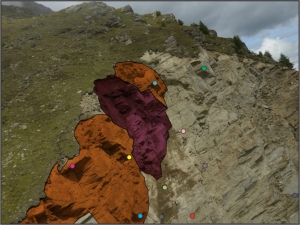 Randa rock slope immediately after the 20/08/14 failure (credit: M. Phillips). The region that failed during the 29/08/14 video is highlighted in dark red, while the region highlighted in orange corresponds to a potential instability noted in my previous post. Dashed grey lines marked on the grass above the scarp delineate regions of exposed soil and possibly disturbed vegetation, suggesting relatively recent movement. Colored circles can be used to reference pre- and post-failure photographs. Click here to view the original image.

The dark silty soil generated during the event makes it difficult to correlate features on the rock face beneath the failure, however, it seems like it initiated at a site just above the soil-covered region of the rock slope (i.e. above the light green marker). The slope crest was then the last to collapse. Often such an upward-propagation is associated with removal of a key block that has been weakened by high tensile or shear stresses at the toe of a creeping rock slope. This would be consistent with excellent work by members of the Engineering Geology group at ETH Zurich, which identifies slow creep in the upper section of the slope, and correlates this to bedrock structure and seasonal thermomechanical effects. As in the lower image, the failed region appears to lie immediately above a long undulating discontinuity (black lines in inset) that slopes downhill at an angle slightly greater than that of the upper grass-covered surface. White arrows indicate where the discontinuity seems to have opened up as a result of the upper section creeping downslope relative to the lower rock mass. This kind of movement would be consistent with the initiation of failure immediately above a step in the sliding surface. The current activity could therefore be the result of slow creep that has been ongoing since the Randa rockslides in 1991. The wet summer may have accelerated this process, and although not strictly a ‘trigger’ (as the failure occurred on the first sunny day in several weeks), increased pore pressure and weathering on the sliding surface may have bought the slope to failure more rapidly, and therefore increased the probability of a collapse on any given day.

If this event is the result of deeper slope movement (as opposed to an isolated collapse of surficial material), then possible soil disturbance 10’s of meters back from the active cliff face (see image above) may be an indicator of much larger failures in the future (although no-where near the volume of the 1991 events). Irrespective of the driver or mechanisms, this apparent re-activation of the slope is interesting, and further observation or investigation could be warranted. 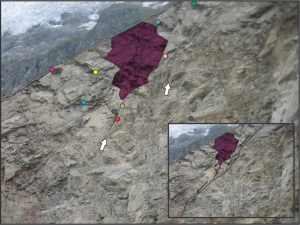 An alternative view of the Randa rock slope prior to failure (12/08/14, credit: J. Beutel). Two apparently open fractures are indicated by white arrows. The inset provides an interpretation of creep that may have contributed to the opening of steeper sections of the undulating discontinuities. As in the previous image, the region that failed during the 29/08/14 video is highlighted in dark red. Colored circles can be used to reference pre- and post-failure photographs. Click here to view the original image, additional annotated and un-annotated pre-failure images are also available.

Fracturing of ancient bedrock surfaces during an extremely hot summer