How different are the New Zealand and European Alps?

The answer is very, and it’s all down to climate, vegetation, and tectonics. 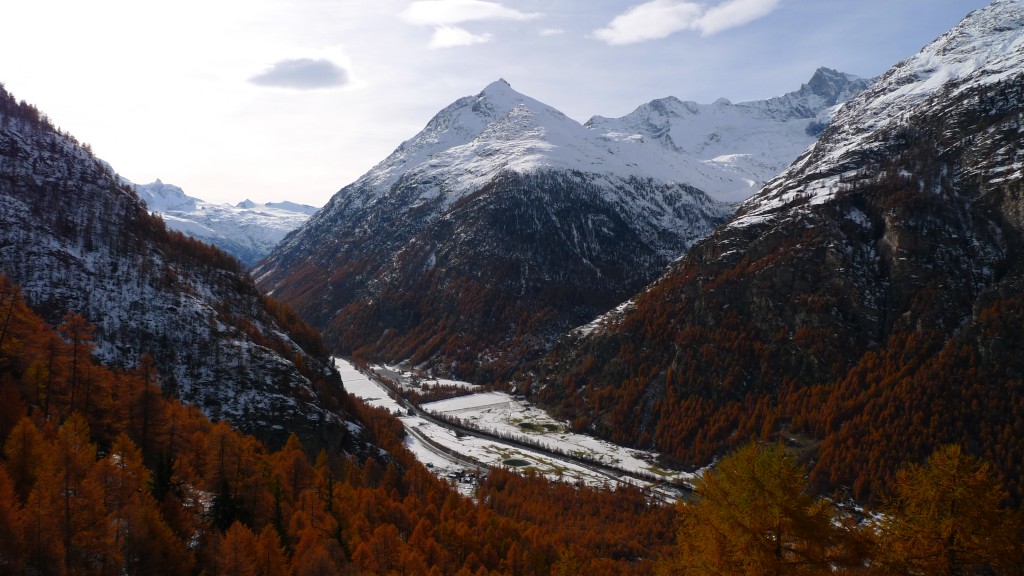 Below are equally scaled Google Earth images of the Arolla Valley in the central Swiss Alps (left), and the Callery Valley on the western side of the New Zealand Alps (right). Of course both ranges present a diversity of environments, but these two catchments are not unusual, and although the floor of the Arolla Valley is almost 1.5 km higher than that of the Callery, both are affected by glaciers, rivers, and landslides, and have a similar upstream area – offering an interesting comparison.

The most striking difference between these two images is the amount of sediment that covers the surface of the valley glacier in the Callery Valley (slider left). This is matched by the amount of gully erosion that seems to affect most hillslopes in the catchment. In contrast, sediments in the Arolla Valley (slider right) are present at high elevation, though not particularly mobile. The glaciers are only partly covered, terminal moraines from an earlier advance are clearly preserved, and slow moving rock glaciers that are detached from the valley floor dominate the slopes at the top of the image. 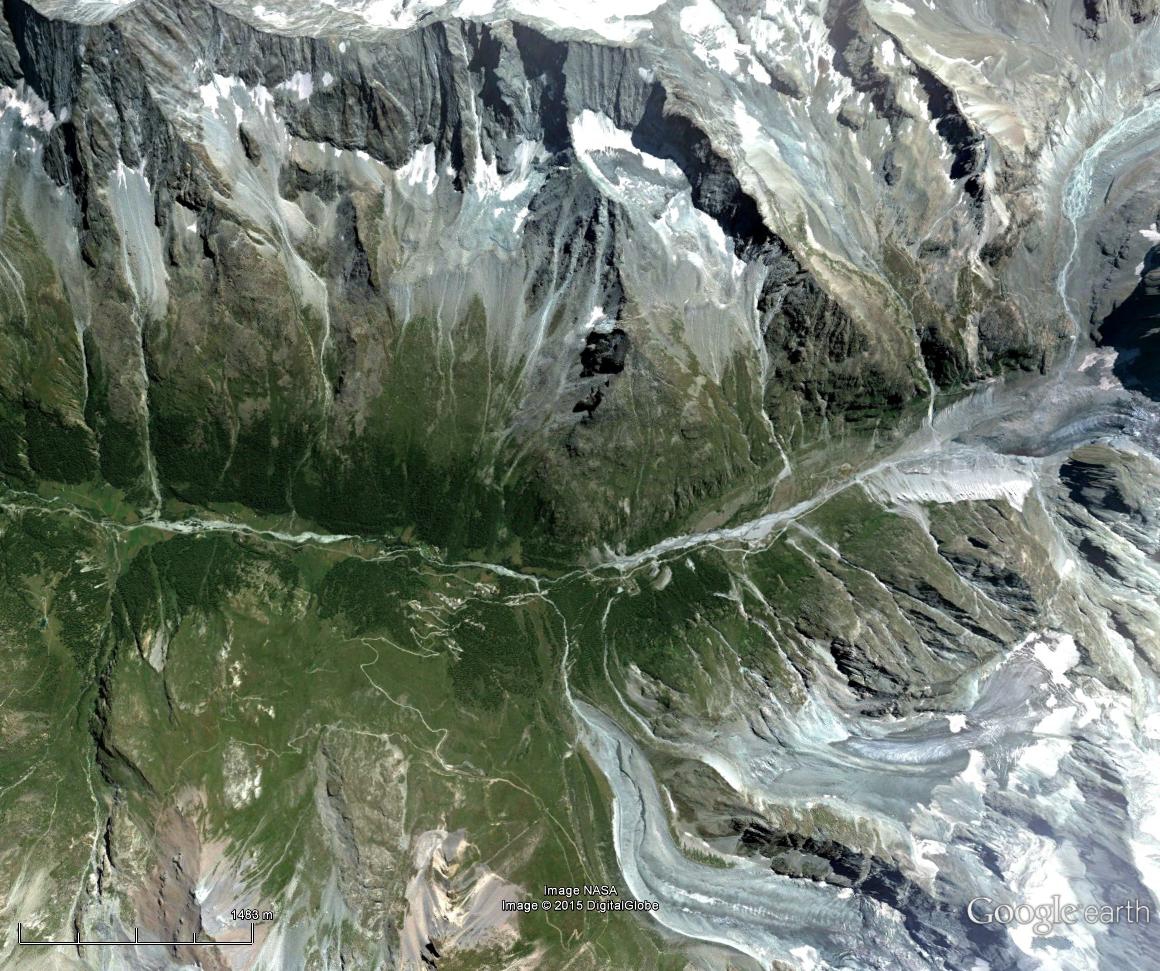 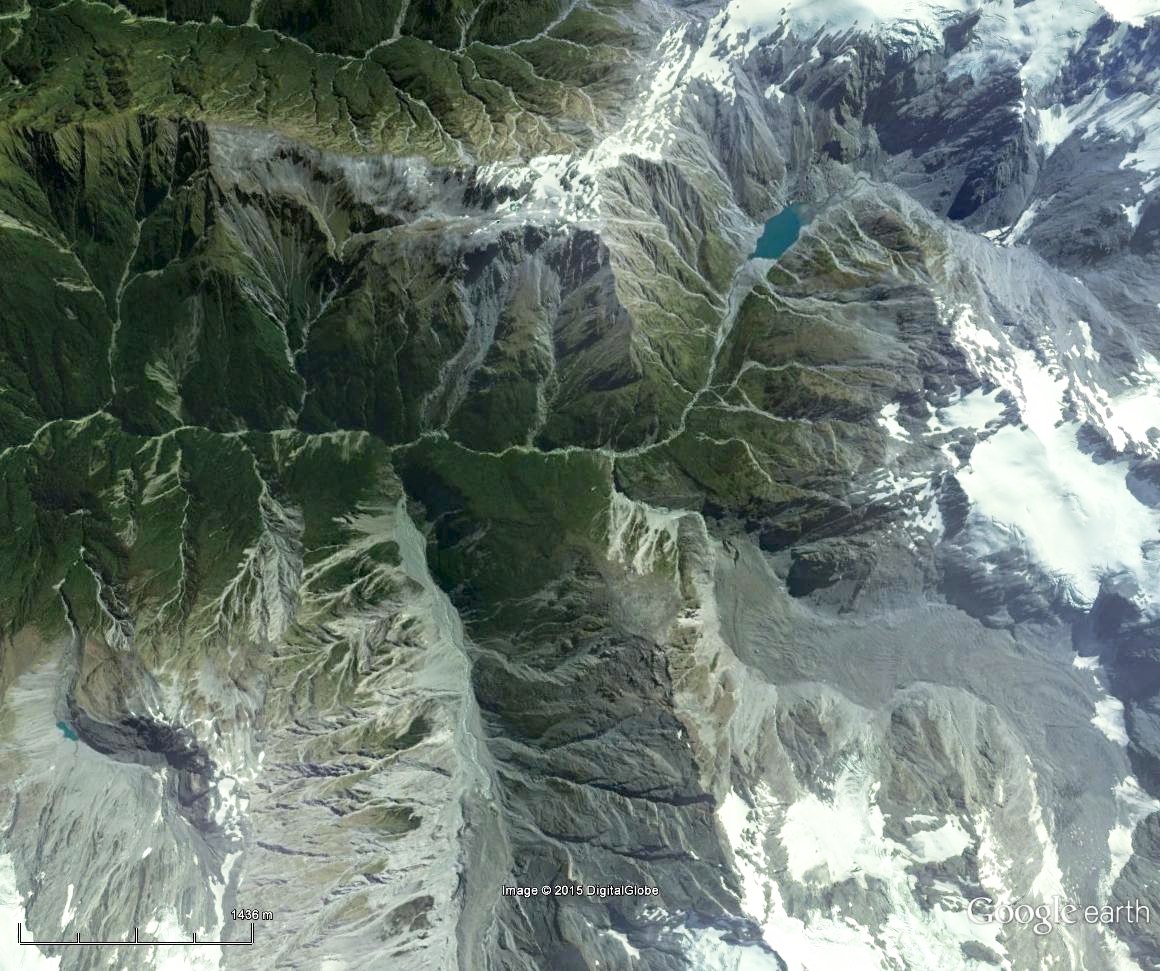 A comparison between the Arolla Valley (left, slider right), and the Callery Valley (right, slider left) in mid-summer.

These observations highlight a key difference between the two landscapes, the Callery Valley receives approximately 4 m of precipitation each year, while rainfall in the Arolla totals just 1.6 m/yr. The river is therefore much more effective at both evacuating sediments, and cutting down into bedrock in the valley floor. The V-shape of the Callery Valley owes it’s form to the river, as hillslopes are continually being undermined and effectively ‘pulled down’ at an average of 3.9 mm/yr. The floor of the Arolla catchment on the other hand is relatively flat, and steep forested slopes some hundred meters above the valley floor suggest the landscape still preserves a U-shaped valley formed through glacial erosion more than 20,000 years ago. It’s erosion rate, at just 0.4 mm/yr (1/10th that of the Callery) is similar to the measured rate of local tectonic uplift (0.8 mm/yr cf. 3.1 mm/yr), suggesting that as in New Zealand long-term valley elevations remain relatively consistent in this catchment, and recent processes are likely similar to those that have shaped the valley topography.

Although the root cause of these contrasts is likely the geological setting of the two ranges, differences are most obvious when looking at forests that cling to the mountainsides. While both appear superficially green and grey with frosted white glaciated peaks in summer, autumn brings a different scene as deciduous forests in the European Alps light up orange, before fading to grey. In contrast, the Southern Alps (with only 5% deciduous species) maintain most of their green canopy year-round. Although the biological story is complicated, and the jury still seems to be out on a number of issues, deciduous forests in the European Alps are likely adapted to prevent damage from freezing during continental winters, where temperatures below the tree line commonly drop below -10 ° C. Year-round positive water temperatures in oceans surrounding New Zealand help maintain temperatures close to, or above, 0 ° C.

Tree cover in the Southern Alps extends upward to slightly colder altitudes than global averages (perhaps 100 m), while the growing season is relatively long, and plants at the tree line have sometimes been observed taking the opportunity to grow during warm winter periods (see Cieraad et al., 2014). The conservative approach of New Zealand forest holding on to it’s leaves limits nutrient waste (see McGlone et al., 2004), and helps prevent erosion by intercepting rainfall and landsliding by more consistently drawing up water from shallow soils. In other words, in a rapidly eroding mountain range like the Southern Alps, where instability is common and a large proportion of soil is derived from weathered bedrock (and therefore low in nutrients), this forest seems to have developed like a big wall rock climber, spending more on preparation up front in order to protect what it has in the long-term. European forests on the other hand, where tectonic uplift, rainfall, and erosion are much slower, may have more in common with a sport climber or boulderer picking their weather, achieving short fast ascents, and relying on supplies stored at the base of the route. This more selective European approach is clearly evident in the regular colour changes of the forest throughout the year. 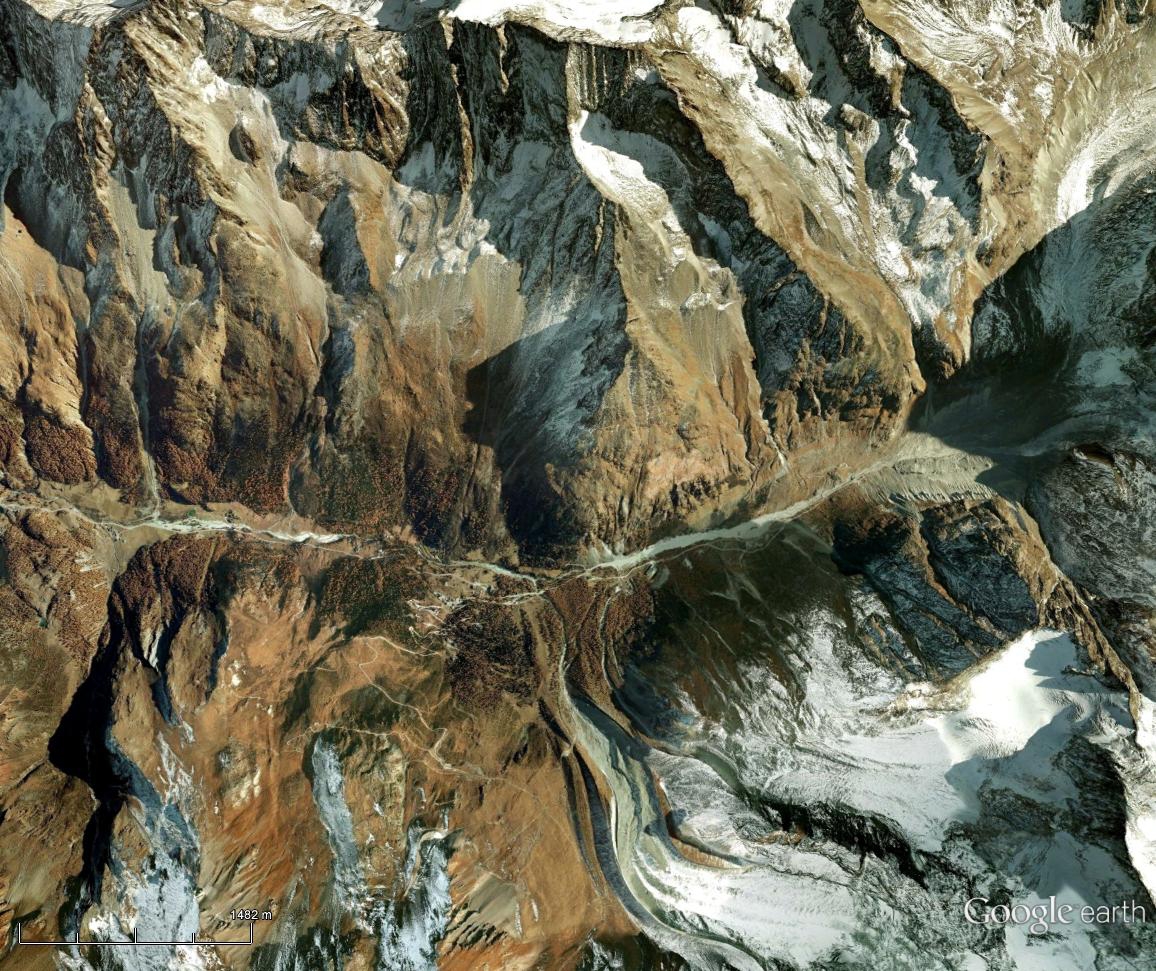 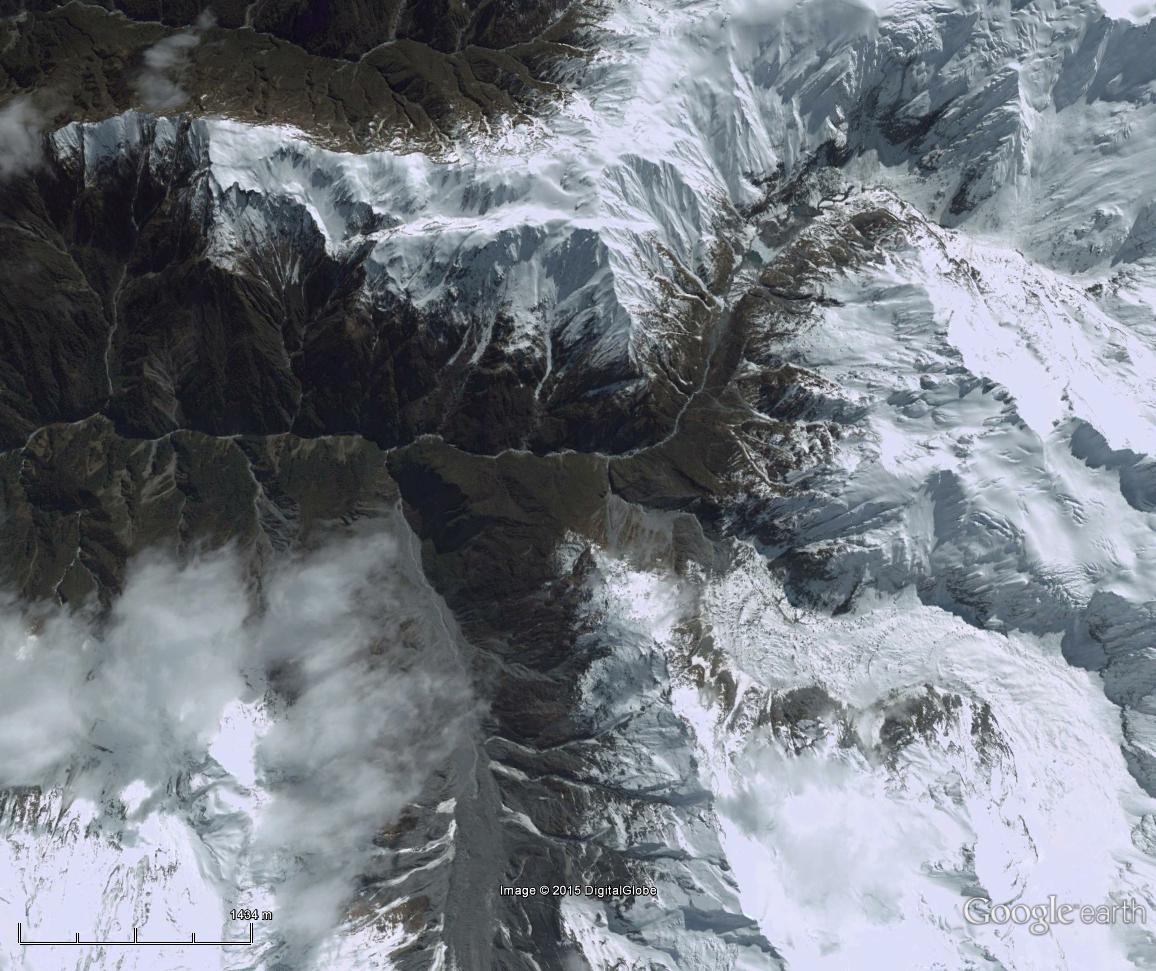 A comparison between the deciduous forest in the Arolla Valley (left, slider right), and the evergreen forest of the Callery Valley (right, slider left) in early winter.

We have a new article out: Rate of fluvial incision in the Central Alps constrained through joint inversion of detrital 10Be and thermochronometric data