Regional scale landslide interpretation was carried out using a 13-year record of global forest change developed by HANSEN et al. 2013. Unsupervised clustering of treeloss points is used to delineate individual landslides, and subsequent landslide density analysis allows to determine the extent of the study area. While this satellite-based catalogue allows to identify shallow landslides in vegetated mountain areas, we cannot account for slope instability on non-vegetated slopes. Nevertheless, the satellite-based treeloss catalogue offers unique insight into temporal and spatial patterns of slope stability, making it also possible to account for reactivations of landslides.

We consider the occurrence of earthquake and rainfall induced landslides relative to a number of common geomorphic factors, including distance from river channels, slope, aspect and curvature. Moreover, new topographic measures for landscape sensitivity were developed, combining topographic roughness and local erosion potential. In order to account for spatial distributions as a result of high-magnitude forcing, annually allocated landslide locations are normalized against an annual set of randomly distributed points, which were seeded using a weighted probability distribution within 3×3 moving average windows.

While we observe that coseimically induced landslides in Fiordland follow normal trends in elevations of landslides observed throughout all years, the Wenchuan earthquake and typhoon Morakot alter elevation patterns, with retrogressive slope failure in Wenchuan and progressive slope failure in Taiwan in the years following the events. Interestingly, we find that coseismically induced landslides follow normal trends with respect to slope gradient, whereas slope failures during typhoon Morakot preferentially occurred on steeper slopes than during weak typhoons. Moreover, in the regions of the 2003 and 2007 earthquakes in Fiordland, as well as in the region of the Wenchuan earthquake, landslide orientation is not according to topographic site effects on oblique incoming seismic waves, and may instead reflect the dependence of weathering and soil production on slope aspect. Slope aspect preference is highly variable in Taiwan, and dependent on wind directions during typhoons. While we cannot account for correlations of sensitivity and landslide occurrence during heavy rainfall events, we identify a noticeable increase in landslide occurrence with increasing sensitivity during seismic shaking.

Additionally, landslide rates were found to remain elevated for 1 year, 2 years and 5 years, after typhoon Morakot, the 2003 Fiordland earthquake and the 2008 Wenchuan earthquake, respectively. 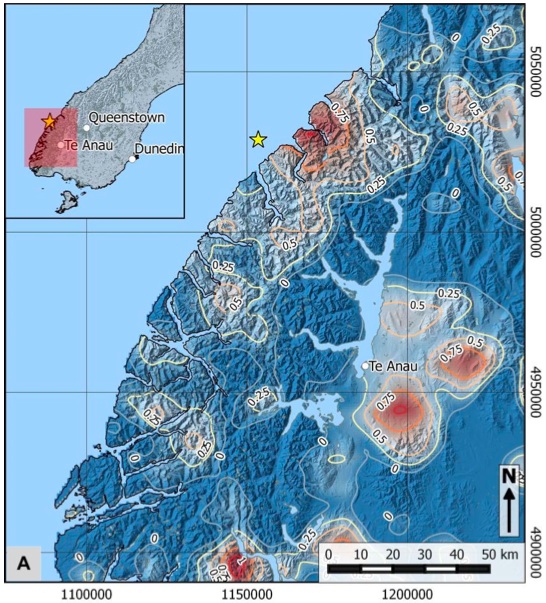 Percentage-increase (log-scale) in landslide density, recorded in 2007, the year of the Fiordland earthquake.